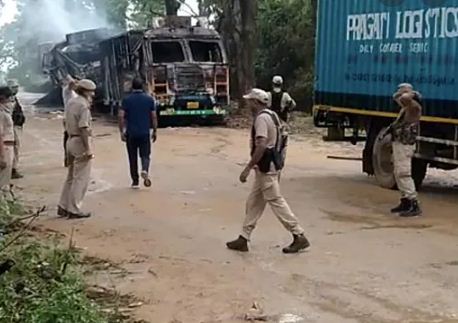 New Delhi. Seven trucks were torched by militants near Diyungbra in Dima Hasao district of Assam. This incident is being told on Thursday night. The special thing is that five truck drivers were burnt to death in this arson. These trucks were carrying coal and other materials to a nearby cement manufacturing plant.

According to the report, the militants also fired several rounds before the arson. The police team has reached the spot and the matter is being investigated. In the initial investigation, the police suspect the militant organization DNLA. 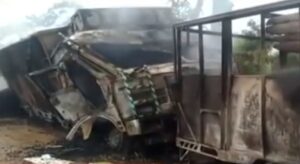 The Assam Police said the terrorists fired several rounds at the truck drivers and others before setting seven trucks on fire. Security personnel reached Umrangsu Lanka Road and recovered the bodies.

According to Superintendent of Police (Dima Hasao District) Jayant Singh, “We had received information that five suspected terrorists, who had earlier fired with automatic weapons, set fire to seven trucks. We suspect the terrorist organization DNLA to be behind this attack.

At present, the Assam Rifles unit of the police and the Army is conducting an extensive search operation in the area. The incident took place at some distance of 200 km from Guwahati.

Police said that five bodies have been recovered. The search operation is being conducted with the help of Assam Rifles.

The Dima Hasao district is one of the three hill districts of Assam. It was earlier the center of rebel activities and groups. However, in the last five years there was a lot of peace here.

In the month of May this year, security forces had killed six DNLA terrorists in an encounter in Dhansiri area of ​​Karbi Anglong district. Police said arms and ammunition have been recovered from their possession.