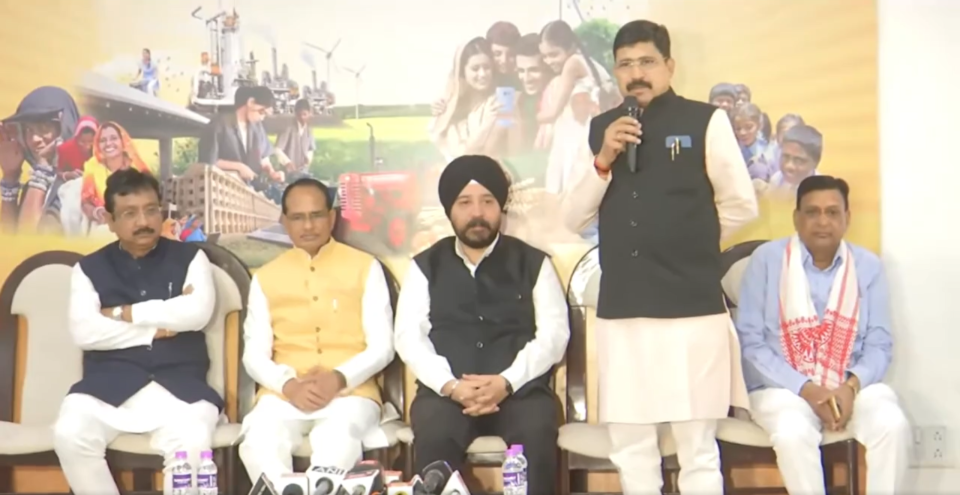 Before the Bharat Jodo Yatra of Congress in Madhya Pradesh, the BJP has given a big blow to the Congress. Narendra Saluja, close to former Chief Minister Kamal Nath and vice-president of the state media wing of the Congress, has left the Congress. He also joined BJP on Friday morning.
Politics has heated up in Madhya Pradesh once again due to a change of party. Friday is the third day of Congress’ Bharat Jodo Yatra and on this day veteran Congress leader Narendra Saluja resigned from Congress and joined BJP. On Friday morning, in the presence of Chief Minister Shivraj Singh Chouhan, Forest Minister Vijay Shah, and state media in-charge Lokendra Parashar, he joined the BJP office.

The arrival of Saluja will strengthen the BJP

After joining BJP, Kamal Nath’s former media coordinator said that the truth of 84 riots came to the fore after the incident in Khalsa College. After that, my mind was disturbed. The truth of those accused of killing my people of the religion I believe in has opened my eyes. I cannot work with such an organization. After the Khalsa College incident, I did not do any Congress posts. Neither participated in Rahul Gandhi’s Bharat Jodo Yatra. I have joined BJP as a worker. Whatever responsibility will be given by BJP, I will fulfill it wholeheartedly.

Saluja was very close to Kamal Nath
Kamal Nath, who left Congress and joined BJP, was counted among the very close leaders of former CM Kamal Nath. He was also the media coordinator of State Congress President Kamal Nath. It is being told that after the recent Khalsa controversy in Indore, the distance between the two started appearing. Actually, Kamal Nath had reached the program organized at Khalsa College, Indore on the occasion of Guru Nanak Dev Jayanti. Only then Kirtankar Manpreet Singh Kanpuri who came from Punjab protested.

Politics was hot a week ago

A week back, State Congress President Kamal Nath had said that many BJP MLAs are in touch with us. Here, a similar reaction had come out from the BJP as well. In which it was said that many Congress MLAs are in contact with us. Both parties claimed to be in touch with each other’s MLAs and leaders. After these statements, the discussion in the political circles intensified that the process of leaving the party once and joining the other party could intensify.

21% candidates in first phase of Gujarat elections have criminal...