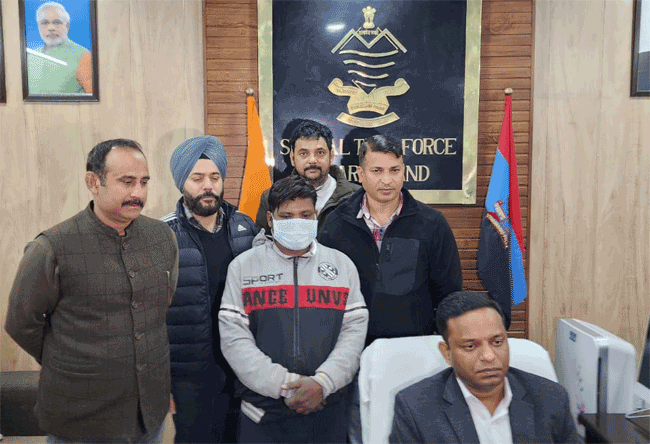 Uttarakhand STF has got a major success in the campaign being run by the bounty hunters. STF team arrested crook carrying reward of one lakh rupees from Shirdi Maharashtra. It was told that the said miscreant was absconding from Haridwar district since the year 2018. He is the leader of the Ghodasan/Chadar gang. He has been identified as Rajudas S/o Musafir, resident of Ghodasan police station, Ghodasan district, East Champaran, Motihari, Bihar. In Shirdi, he was trying to give an incident to the big incident. On the information of STF, Shirdi police also arrested six of his associates. He is wanted from many states. In the year 2018, his gang made away with mobiles, laptops, iPads worth lakhs of rupees from Prime Apple Showroom near Ranipur Mode, Haridwar. Goods worth about 40 lakhs were stolen from here.

Senior Superintendent of Police STF Ayush Aggarwal was told that for the last one month STF was planning and working on the members of Ghodasan gang/Chadar gang. Many members of this gang are wanted for a long time. This gang has carried out incidents of theft from branded showrooms of many big mobiles, laptops in different states.

He said that Ghodasan gang/Chadar gang, near East Champaran Bihar, carry out criminal incidents all over India. The members of this gang form gangs and take their gangs out of their state to big cities of different states. Rent hotels outside the city. Then to make the event happen in that city, first mark the showroom of any big branded mobile phone/electronic gadgets company.
After that, the gang members stand outside that showroom in the night with a sheet. Under the guise of this sheet, a member lifts the shutter of the showroom and goes inside. From there, the gang members abscond after stealing costly mobile phones, laptops etc. worth lakhs of rupees. Then they go to Nepal and sell the stolen mobile phones and other valuable electronic items. This prevents them from being tracked by surveillance. The members of this gang do not have a place to stay, due to which their arrest is not possible easily.

Ayush Aggarwal told that in the year 2018, the vicious criminal Rajudas alias Raju’s son Musafir, resident of village Ghodasan, police station Ghodasan, district Champaran, Bihar, absconding after committing the theft of lakhs from Apple mobile showroom in the year 2018, was absconding for four years. A reward of one lakh has been declared on him by the police headquarters. On receiving information regarding him, a team of STF was sent to Shirdi Maharashtra. There the accused Rajudas was arrested after raiding all the possible places.
During interrogation, Rajudas was told that 06 other members of his gang were also staying separately in Shirdi. They had come there in search of a big showroom. The details of this inquiry were given by the STF team to Shirdi Maharashtra Police. On this basis, the Shirdi police traced and arrested the other 06 members of his gang. The arrested accused Raju Das will be produced in the Haridwar court today on behalf of the STF team. In this arrest, the STF team included Inspector Abul Kalam, Sub Inspector Yadvendra Bajwa, Sub Inspector Dilbar Negi, Chief Constable Brijendra Singh Chauhan, Chief Constable Sanjay Mandhar, Constable Mahendra Singh Negi.