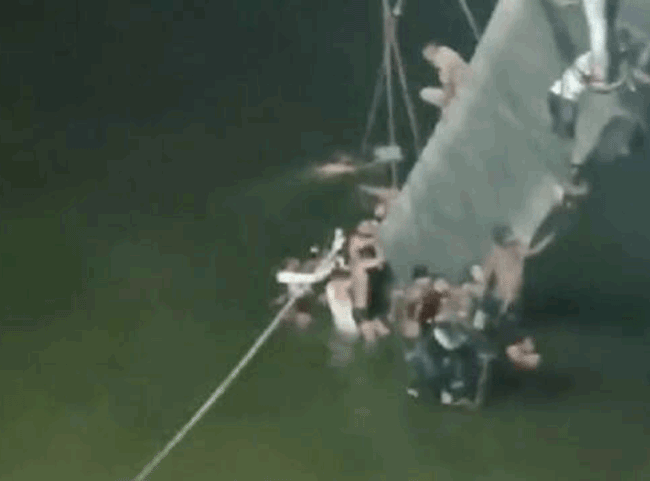 A cable bridge collapsed in the Machhu river in Gujarat’s Morbi area today. Many people are feared to be injured in this incident. It is said that when the bridge collapsed, there were about 500 people on it. Rescue work is going on in full swing at the spot. According to reports, the suspension bridge collapsed in Morbi today. About 100 people have fallen in the river. It is being told that more than 40 people have died in the accident. The death toll can be low or high. At present, the rescue is going on to rescue the rest of the people who fell in the river. The bridge was opened after repairs four days ago.

On getting information about the incident, the police and administration team reached the spot and started the rescue operation on a war footing. It is being told that hundreds of people were present on the bridge at the time of the accident. Rescue teams have rescued many people from the river and sent them to the hospital. The search for other people is also going on. Efforts are on to get all the people out of the river as soon as possible. Today being a holiday, it was very crowded here. Gujarat Chief Minister Bhupendra Patel has expressed grief over the accident.

Morbi Cable Bridge was a historic bridge built many years back. After repairs and restoration, the bridge was inaugurated on 26 October on the occasion of Gujarati New Year. Prime Minister Narendra Modi spoke to Gujarat Chief Minister Bhupendra Patel and concerned officials regarding the accident in Morbi. He has demanded immediate deployment of teams for the rescue operation. He has asked to monitor the situation closely and continuously and extend all possible help to the affected people. Prime Minister Narendra Modi has announced an amount of two lakh rupees from PMNRF for the families of each of those who lost their lives in the accident in Morbi. 50,000 will be given to each injured.