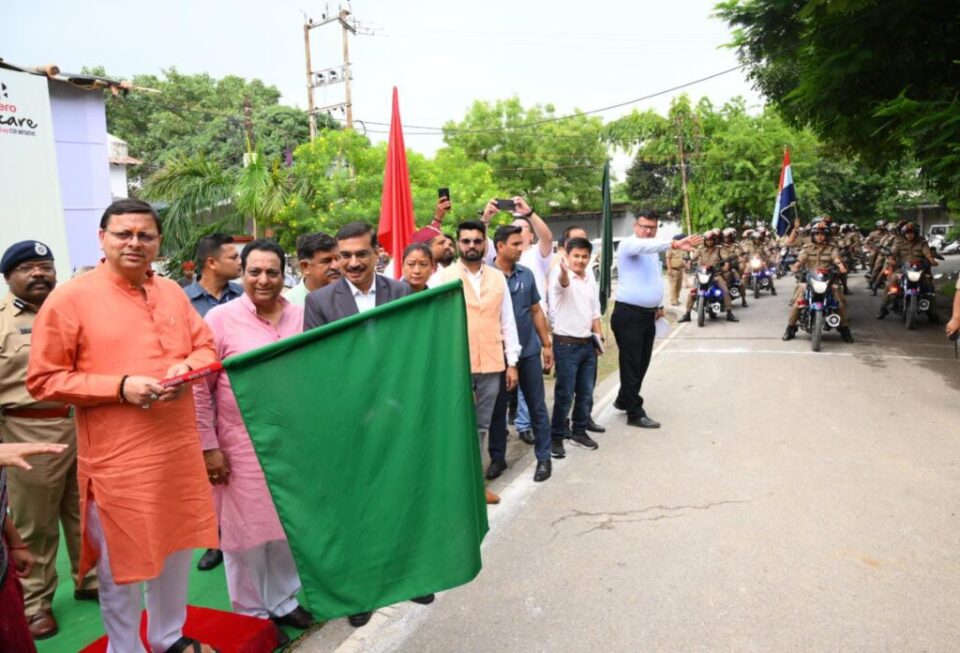 Addressing the program, Chief Minister Pushkar Singh Dhami congratulated the police administration on laying the foundation stone of administrative building, cargo quarter guard and barracks. He said that today with the foundation stone laying, a long-standing demand of the police department has been fulfilled. It is the resolve of the state government that if the foundation stone of any action plan has been laid in our government, then it will also be inaugurated in our government. As soon as this construction work is completed, the police personnel will directly get the benefit of it, I expect our jawans to give good services to this state with good living conditions.

It will be very important and convenient for the personnel of this police line. He told the executive organization and the police department that the new modern building should be equipped with all the basic facilities. He said that special care should be taken about the quality during construction and also instructed not to take any kind of negligence in the construction work. He said that state level and national level programs are being held in Dehradun district, for which high quality administrative building is required in the state police line, due to the presence of excessive police force and PAC administration to maintain law and order in the state. Police force in Police Line, Dehradun remains under heavy pressure, for which additional barracks need to be constructed.

Chief Minister Pushkar Singh Dhami said that the work done by the police during the Corona period is less than appreciated. The police administration has an important role in the ongoing Char Dham Yatra.

The police is giving its full cooperation, as well as the tourist places like Mussoorie, Nainital, where a large number of people come, the police plays the job of maintaining law and order very well.
During this, while apprised about the various works done by the government for police welfare, Chief Minister Shri Pushkar Singh Dhami said that for the modernization of Uttarakhand Police, an amount of Rs. The amount has been approved.

An amount of Rs 3 crore has also been approved for the purchase of vehicles. To modernize the Cheetah Police, small arms worth about Rs 3 crore have been purchased. During Kovid, every police personnel was given an incentive of Rs 10 thousand by the government for being a front line warrior. A provision of Rs 2.5 crore has also been made in the budget for the welfare of the employees.

The amount of reward given to police personnel for punishing/arresting criminals has also been increased. In place of uniform kit, the Head Constable / Junior and Class IV personnel appointed in Uttarakhand Police Department will get Rs. 2250 and Rs. 1500 per annum uniform allowance has been sanctioned. Which will be increased soon.

He said that an advance amount of Rs.30.40 lakh has been sanctioned to 10 serving police personnel and their dependent members under the Jeevan Rakshak Nidhi. Under the Police Martyrs Fund, immediate financial assistance of Rs. 1 lakh each was provided to the dependents of 14 deceased police personnel.

Chief Minister Shri Dhami apprised about the promotion and recruitment work of police personnel that 13 candidates were provided employment in the deceased dependent. The 723 vacant posts of Chief Constable NP/Information/PAC/SP have been selected through departmental promotion examination. Promotion has been given to the personnel of police clerical cadre. Release was issued for direct recruitment to 221 posts of Sub Inspector NP/Information/PAC and Fire Service Second Officer.

Along with this, with a view to provide employment to the unemployed youth of Uttarakhand, a release was issued for direct recruitment to 1521 posts of constable NP/Information/PAC/Fire Service and for this the process of physical efficiency test is going on at 17 recruitment centers. He said that on the release made for direct recruitment on 272 vacant posts of Chief Constable, Police Telecom, written examination is proposed in July-2022 this month. The responsibility of conducting all these examinations has been given to the Uttarakhand Subordinate Services Selection Commission.

Chief Minister Pushkar Singh Dhami said that our government is moving towards making Uttarakhand Police a smart police as per the vision of the Prime Minister. The government wants to make the police more strict and sensitive, technical and mobile, alert and accountable, reliable and responsive, technically efficient and efficient, for this efforts are being made by the government as much as possible. During this, he talked about the elevation of the multipurpose office building under construction in future to be made according to the mountain architecture.

DGP Shri Ashok Kumar said that in the coming time such administrative building would be developed in Uttarakhand style. During this, he apprised that as per the instructions of Chief Minister Pushkar Singh Dhami, the verification of outsiders is going on on a large scale by the Uttarakhand Police and the work of removing illegal loudspeakers installed in cities, which encourages noise pollution, is also going on. He said that we are working continuously in coordination with the government to make Uttarakhand Police the best police in the country.

During this, MLA Shri Vinod Chamoli, Special Principal Secretary Abhinav Kumar, senior officers of Police Department and others were present.