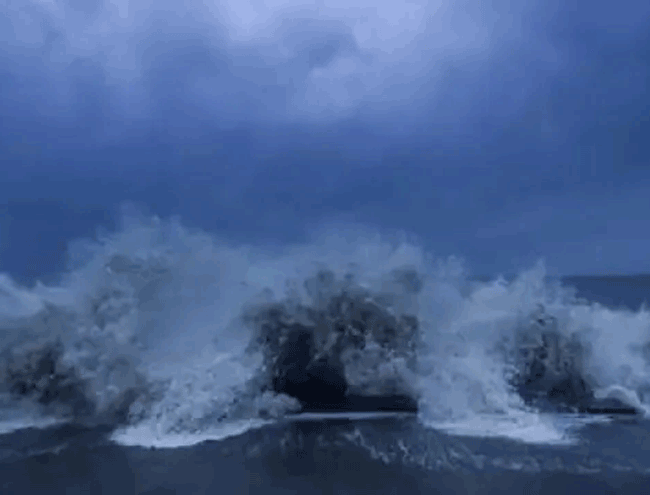 The Meteorological Department has warned of heavy rain in Coastal Bengal and northeastern states after the storm ‘Sitrang’, which rose in the North Bay of Bengal, moved north-northeastwards and hit 260 km southeast of Sagar Island on Monday. According to the Meteorological Department, due to the storm, North 24 Parganas, South 24 Parganas and Nadia districts of West Bengal will also receive rain on Tuesday.

Seven people have died in Bangladesh with the knock of ‘Sitrang’, while the authorities have evacuated thousands of people. The India Meteorological Department (IMD) has predicted rain in Assam, Meghalaya, Mizoram and Tripura under the influence of Cyclone Sitarang. More than 2.19 lakh people were evacuated to safer places in Bangladesh on Monday as Cyclone Sitarang moved closer to the country’s southwest coast.

A red alert for heavy to very heavy and very heavy rainfall has been issued for Assam, Meghalaya, Mizoram and Tripura.

According to the IMD, there is a possibility of thunder, lightning and heavy to very heavy rain at many places in Tripura on Monday and Tuesday, while ‘Red’ and ‘Orange’ alert has been issued for heavy rains in many districts of Assam. . The West Bengal government was observed to be taking all precautionary measures, including evacuation of people and supply of relief material, to deal with possible devastation under the impact of Cyclone ‘Sitrang’, the IMD said in a press release.

The Meteorological Department has predicted widespread light to moderate rain and heavy to very heavy at isolated places in West Bengal on Monday and Tuesday due to the cyclonic storm. Fishermen have been advised not to venture into the sea from Sunday till further notice. Chief Minister Mamata Banerjee had called an emergency meeting at the state secretariat ‘Naban’ to take stock of the preparedness. The cyclonic storm has been named ‘Sitrang’, which is a Thailand name.