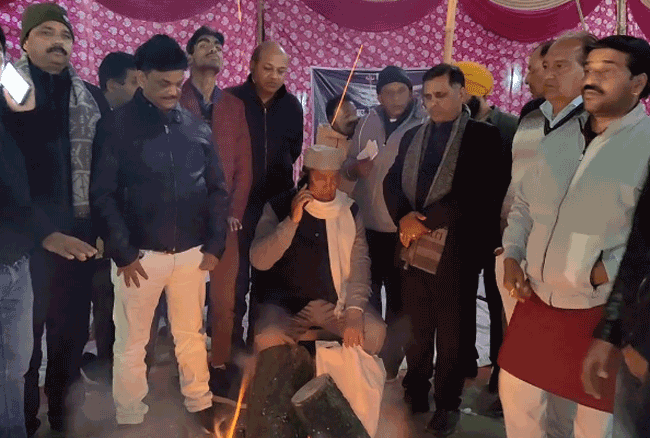 Former Chief Minister of Uttarakhand CM Harish Rawat is sitting on a 24-hour dharna outside Gandhi Park in Dehradun. Harish Rawat has started his dharna today from 12 noon on Monday. Their strike will continue till 12 noon tomorrow. Harish Rawat demands that the name of the VIP who is being discussed in the Ankita murder case should be revealed.

Harish Rawat had also appealed to various organizations to join his dharna. In this, people associated with CPI CPM and other organizations have also participated in Harish Rawat’s dharna. Arrangements have also been made for a bonfire at the dharna site in winter. Efforts were made to remove the feeling of cold by roasting in a black Bhatt pan in the fire of bonfire. Harish Rawat said that there is no question of disbelief on anyone, but if the future of Uttarakhand is to be saved, Ankita will have to get justice. Harish Rawat also said that the name of the VIP should come out. VIP should be searched.

He said that the daughter should get justice in the Vanantara episode. It is said that the statement of the minister of the state government regarding VIPs in Vanantara Resort has come forward, it can affect the case in future. Harish Rawat said that the receptionist of Vanantara Resort said in a WhatsApp chat that she was being pressurized to provide special service to VIPs in the resort. The presence of VIPs is a serious matter in this regard. At the same time, Harish Rawat also attacked the government in the matter of back door appointments in the Uttarakhand Legislative Assembly. He said that if these appointments are illegal, then the one who gets the appointment is not guilty, but the one who gives and gets the appointment is guilty.

On the other hand, cabinet minister Rekha Arya retaliated on the dharna of former Chief Minister Harish Rawat. He says that Harish Rawat should first think about his party, what has become of his party. Then talk about the interests of others. He said that Harish Rawat sometimes talks about making a Dalit the Chief Minister during elections, sometimes raises the issue of Muslim University, and sometimes goes to bathe in the Ganges. Moreover, during the assembly elections, he could not even finalize his ticket as to where he would contest the elections. In such a situation, nothing can be said for what this protest of Harish Rawat is.

This is the case

Let us tell you that receptionist Ankita Bhandari had gone missing from the night of September 18 under suspicious circumstances from the resort located at Ganga Bhogpur under Yamkeshwar block of Pauri district. When the police investigated, it was found that his body was thrown into the Chilla canal after killing him. Resort owner Pulkit Arya, manager Saurabh Bhaskar and assistant manager Ankit Gupta have been arrested in this case. The main accused Pulkit Arya is Pulkit Arya, son of former BJP leader and former minister Vinod Arya. Pulkit is the owner of Arya Resort. Vinod Arya and his other son Ankit Arya were expelled by the BJP.