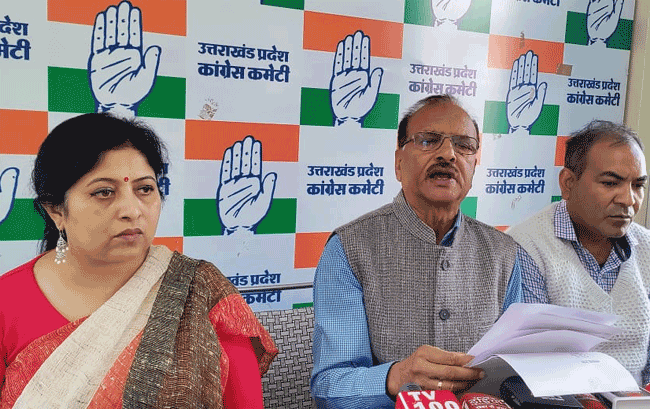 Former Chief Minister of Uttarakhand Harish Rawat will undertake Bharat Jodo Yatra from 22 to 25 November in the Haridwar district. Its itinerary has also been issued. State Congress Committee Vice President and media advisor to former Chief Minister Harish Rawat Surendra Kumar gave this information through the press at the Congress headquarters today. Along with this, he also released a poster to show the solidarity of the Congress.

The poster also had photographs of all senior Congress leaders, including state in-charge Devendra Yadav, state president Karan Mahra, LOP Yashpal Arya, Qazi Nizamudin, Pritam Singh, Ganesh Godial, MLAs, travel program coordinators, leaders in various fields. Names of local leaders are included. Along with this, 9 major issues of Indian couples have also been shown. He said that Rawat will leave for Udalhedi village from Roorkee on Tuesday, November 22, 2022, at 10 am. Where Chaudhary will inaugurate the couplets by garlanding the statue of Charan Singh. He will also hold a public meeting on this occasion.

On Friday, November 25, 2022, the yatra will start from Alipur at 11 am and end with a public meeting from Dinarpur, Ekadkala, Bahadurpurjat, Jhabari, Ambuwala Bazar, Ghissupura to Dhanpura by garlanding the statue of Subhash Chand Bose at Alawalpur, Subhashgarh. He said that nine major issues have also been made by Rawat ji for the Bharat Jodo Yatra. The creation of India based on brotherhood and tolerance, propaganda of patriotism and national upliftment, protection of parliamentary democracy and democratic institutions, and public awareness against unemployment and rising inflation are included.

Apart from this, continuous increase in atrocities against women and a huge decline in the law and order situation, public awareness against the hijacking of Panchayati democracy in Haridwar, declaration of the purchase price of sugarcane according to the demand of farmers, improvement of dilapidated roads of Haridwar district, There is a hue and cry against the harassment of Congress and democratic opposition workers. 51 passengers will continuously participate in Bharat Jodo Haridwar Zindabad Yatra along with former Chief Minister Harish Rawat. Along with this, he released a long list of those involved in it.