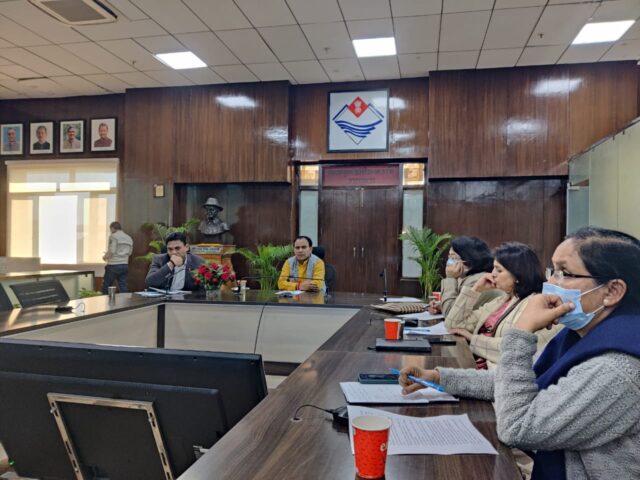 In view of the knock of Corona epidemic at the international level, the state government has also become alert. State Health Minister Dr. Dhan Singh Rawat said that apart from increasing the RTPCR test in the state, genome sequencing labs have been established in all four medical colleges and testing of genome sequencing has also been started in Doon Medical College. In view of the alarm of the Corona epidemic, instructions have been given to the departmental officers to speed up the vaccination campaign in the state, along with a demand has been made from the Central Government to provide three lakh precaution doses. Corona prevention was discussed in detail in the virtual meeting of health ministers of all the states organized under the chairmanship of Union Health Minister Dr. Mansukh Mandaviya. The Union Health Minister instructed the Health Ministers of all the states to speed up the vaccination campaign in their respective states, to increase the RTPCR test and compulsorily genome sequencing of Covid positive cases in view of the experiences of the Corona period. He said that all the states should conduct a mock drill in all the medical units of their respective states on December 27 regarding their preparedness, so that adequate resources, man power and management can be estimated for the prevention of corona. Whose report will have to be submitted to the Union Health Ministry by all the states.
In the meeting, State Health Minister Dr. Dhan Singh Rawat gave details of the preparations being made by the government to prevent corona in the state. Dr. Rawat said that 100 percent first and second doses have been given to citizens above 12 years of age in the state, while 25 percent people have been given precaution dose. He has demanded three lakh precaution doses from the Government of India so that the third dose can also be given to all the citizens at the earliest. The departmental minister said that the four medical colleges of the state, Dehradun, Srinagar, Haldwani and Almora, have the capacity of more than 11 thousand RTPCR tests per day, while the genome sequencing lab established in these medical colleges has the capacity of more than 2 thousand genome sequencing per month. At present, genome sequencing lab is functional in Doon Medical College, while permission has been sought from NCDC for registration in INSACOG in other three institutions.
As soon as the permission is granted, the genome sequencing lab will start here too. He informed that at present a total of 22 thousand 428 oxygen cylinders, 9 thousand 743 oxygen concentrators and 86 oxygen generation plants are functional in the state, while 762 ICU beds, 8 thousand 189 oxygen support beds and 1 thousand 32 ventilators are available in state hospitals. . Similarly, the facility of about 15 thousand RTPCR tests is available daily at 11 state testing centres. Secretary Health Dr. R. Rajesh, Director Health Dr. Vinita Shah, Director NHM Dr. Saroj Naithani, Dr. Mitu Shah, Dr. Pankaj Singh and other departmental officers were present in the meeting.