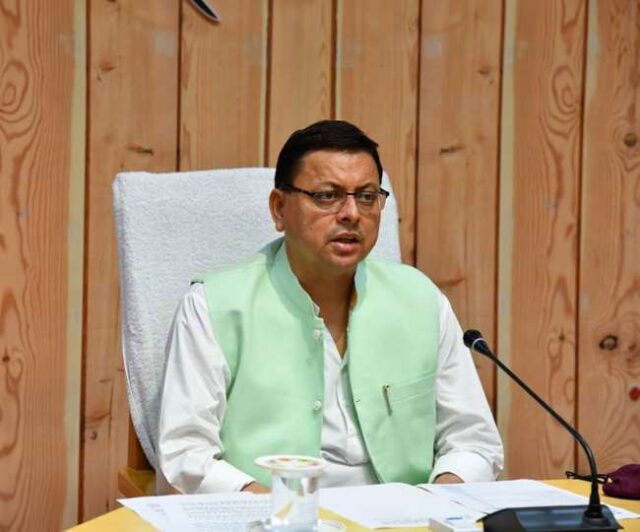 Dehradun:  A meeting of the state cabinet was held today under the chairmanship of Chief Minister Pushkar Singh Dhami. 26 important decisions were taken in the cabinet meeting. Accommodation in the meeting held in the Secretariat; Many important decisions were taken including removing the discrepancy in changing the land use of the petrol pump.
Apart from this, the decisions taken include 2 lakh instead of 1 on road accident death, amendment in Uttarakhand Information Technology Manual, user charge of Rs 50 instead of 20 for a certificate, an annual audit of forest corporation in assembly, housing; Removal of discrepancy in changing land use of petrol pump, 15%, and 7.5% will be charged in urban areas, civil judge junior division will be called civil judge. Under the Horticulture Department of Agriculture, the Uttarakhand government will give a 25% subsidy with a 50% subsidy from the center in the Anti Hellnet Scheme. Money will be available in Atal Awas Yojana like PM Awas Yojana. About 1 lakh 20 thousand will be available. Their income limit increased. Those who have a budget of 32 thousand and 48 thousand annually will get the benefit. 30 days If a child is absent from school without being informed, he/she will be considered out of school. Earlier this period was 60 days. After 30 days, the school administration should talk to the parents.

Passed in Uttarakhand Logistics Policy cabinet. Finance Department – ​​Accident insurance of GST-registered traders increased from 5 lakh to 10 lakh. 143 special teachers will be given to children with special needs. This newly created private university in Haridwar will be named Haridwar University. Earlier it was Roorkee University. will come to the house. Dearness Allowance and Bonus- The cabinet authorized the Chief Minister to decide on this. Skill Development – ​​Outsourcing recruitments can also be done from the employment department. So far Upnal is from PRD. You will not have to go to jail under the Uttarakhand Anti-Littering Act. Only the fine will be imposed, the revenue police area will be transferred to the regular police in a phased manner. In the first phase, 6 police stations, 20 police outposts will be built in the areas of tourism activities. Seal on the rules for promotion of police constables to 1750 posts of Additional SI. The cabinet has authorized the Chief Minister for an ordinance on women’s reservations.