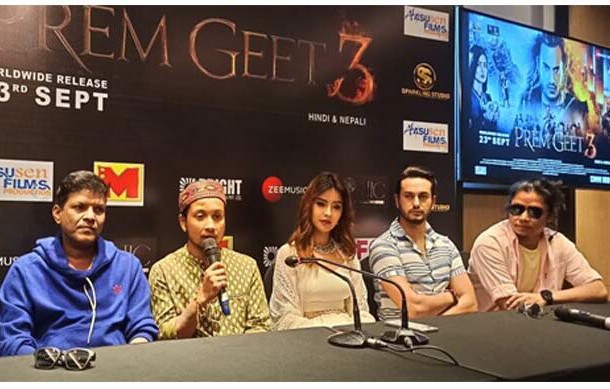 A press conference was held today for the promotion of Nepali film Prem Geet-3 at a hotel located on Rajpur Mussoorie Road in Dehradun on Wednesday from the capital. During this press conference, it was told that this film is a film in the Indo-Nepal language. The film will be screened in Hindi for the first time in India in a Nepali language film.

During this press briefing Prem Geet-3 is the first Indian Nepali film. In which Indian Ideal 12 winner Pawandeep Rajan Champawat has composed Uttarakhand Music. Along with the producers of the film, Subhash Kale and Prashant Gupta are the music composers of the film. The film’s lead actor Pradeep Khadka and actress Christina Gurung and director Santosh Sen along with them interacted with the journalists. At the same time, during this press conference, he told that giving a new look to Bollywood, now for the first time the film of India and Nepal is being released.

This long-discussed film is none other than Prem Geet-3. Which is the first film of India and Nepal. At the same time, since the release of the trailer of this film, its discussion has doubled. Also, in connection with its promotion in Dehradun, the film’s producers Subhash Kale and Prashant Gupta, director Santosh Sen and lead actor Pradeep Khadka and actress Christina Gurung along with music composer Uttarakhand lyricist Pawandeep Rajan knocked in the city. Along with being exposed to the media, all the celebrities interacted with the fans.

During this, Pradeep Khadka told reporters about this film that this film will tell the story of love and sacrifice very beautifully. Somehow we all share a similar lifestyle. Through this film too, the audience will get to see the best lifestyle.

At the same time, actress Christina Gurung said that this story is full of love, revenge, sacrifice, action and drama. I am very happy to be a part of it. And I want to work on such stories in future also.

On this occasion, music composer Pawandeep Rajan told reporters that all the songs of this film are very good. I have got a chance to prove myself once again through this film. I hope the listeners will love my voice as always.

This Nepali film Prem Geet-3 is the third film in the Nepalese superhit Prem Geet, franchise. Before this, actor Pradeep Khadka has been seen in both the parts. In the third part also Pradeep is playing the lead role. Wahi Iss Prem Geet-3, Sey Part Prem Geet-1 and Prem Geet-2 is a grand period drama film apart from the first part. Its budget is also much bigger than the previous two films.

The film Prem Geet-3 starring actor Pradeep Khadka and actress Christina Gurung is originally a Nepali film. Which is now being released in India as well. The teaser of the film is being well-liked by the audience. The film has the finest masala of cinema based on the love story of a couple named Prem and Geet. After two blockbusters, its third part is all set to hit the silver screens on September 23, 2022.

Tiger Shroff and Disha Patani parted ways after 6 years, the couple broke up!

FIR lodged against Ranveer Singh for nude photoshoot in 67A, the sword of arrest hanging

Seeing the teaser of Kangana Ranaut’s ‘Emergency’, your eyes will also be deceived, it is difficult to recognize the actress

Now the ointment of the market glow on the pain of Corona, Emirates buzzing from IIFA

Did KK die of post covid cardiac arrest ? Know what Babul Supriyo and Doctors are saying

Suspense on the death of singer KK, injury marks on the head and face, police registered a case of unusual death

The family came out of the hospital with the body of Sidhu Musewala, know when and where the last rites will be held today

Arvind Kejriwal expressed grief over the killing of Sidhu Musewala, CM Bhagwant Mann said – ‘the accused will not be spared’

Home Minister Amit Shah will see Akshay Kumar’s ‘Prithviraj’ on June 1, before the release, know why special screenings are being held

RRR Box Office Collection Day 4: Rajamouli’s film breaks the record of ‘The Kashmir Files’, earning a lot on the fourth day too!

Vivek Agnihotri, the director of Kashmir Files, trapped on the statement of ‘Bhopal’, now another FIR registered

Rajamouli’s RRR becoming a blockbuster in just 3 days, further earning for a record!

Kejriwal had to comment heavily on The Kashmir Files, people trolled

Section-144 in Kota gave a blow to ‘The Kashmir Files’, people reaching to watch the film from 70km away in UP

The issue of Kashmir files buzzed in the assembly, DM issued a revised order

This big news has come about the film ‘The Kashmir Files’, know how, why and where is the ‘stirring’ happening?

Big relief to Salman Khan in the Blackbuck Poaching Case, the petitions will now be heard in the High Court

The character of ‘Radhika Menon’ of The Kashmir Files is present in real life, know who is this JNU professor

A big decision was taken in Gujarat regarding ‘The Kashmir Files’, the film released last week was removed from theaters