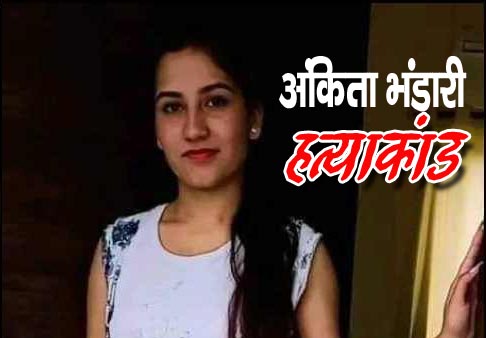 The body of Ankita Bhandari, the receptionist of the BJP leader’s son’s resort, was recovered from the Chila barrage on Saturday. Ankita was thrown alive six days ago by the resort owner Pulkit Arya with the help of his staff in the Chila canal. The post-mortem of the dead body was done by the panel of doctors of AIIMS Rishikesh.

In this, it has come to the fore that injury marks were found on the body of the deceased. There is sorrow and anger in the whole of Uttarakhand regarding this heinous murder. People protested everywhere. The angry mob ransacked and set fire to the accused’s resort. demolished from a part of the resort

A portion of the resort was also vandalized by bulldozers in different phases from Friday night to Saturday morning. No one directly took responsibility for who started the bulldozer. However, there was a competition to take credit.

Meanwhile, on the instructions of Chief Minister Pushkar Singh Dhami, DGP Ashok Kumar has constituted an SIT under the leadership of DIG P Renuka Devi to investigate the matter. The administrative investigation also revealed that the BJP leader’s son’s resort is being operated illegally. Action will be taken on this. Ankita was working as a receptionist

He had joined the job here on August 28. It is alleged that the owner of the resort Pulkit Arya was pressurizing him to have a relationship with the customers. On the refusal of Ankita, he killed the resort’s manager Saurabh Bhaskar and assistant manager Ankit Gupta on 18 September.

With the arrest of the three accused on Friday, the case came to an end. Since then the police was searching for Ankita’s body. On Saturday morning, police and SDRF divers recovered Ankita’s body from the Chila Barrage. The body was cremated on Sunday.

Whose identity was done by his father Virendra Singh Bhandari and brother Ajay Bhandari? The post-mortem of his dead body was done at AIIMS Rishikesh. The last rites of the body will be performed in Srinagar Garhwal on Sunday.

The people of the area had taken to the streets on Friday itself for the handiwork of the son of the BJP leader. The anger of the people came to the fore across the state over this development on Saturday. People demanded the hanging of Ankita’s killers and action against illegally operating resorts and hotels by staging demonstrations, blocking the way. This went on for the whole day. During the post-mortem of Ankita’s body, a huge crowd stood outside AIIMS Rishikesh.

The truth is yet to come to the fore as to who got the bulldozers run on a part of the resort. But Yamkeshwar’s MLA Renu Bisht had to face opposition for this. In fact, the MLA had claimed on the Internet media in the morning that he had got JCB run on the resort of the accused.

After this, when the MLA reached AIIMS to console the relatives of the deceased, the crowd started shouting slogans against him. The people involved in the crowd alleged that the MLA tried to destroy the evidence by running a bulldozer on the resort.

Some of the protesters broke the glass of his car by throwing stones at him. On this, the MLA returned from there. After some time, the women’s commission chairperson Kusum Kandwal was also returned by the protesters from there. Bulldozer running and arson investigation

The resort has been sealed on the orders of District Magistrate Pauri Vijay Kumar Jogdande. He told that Ankita’s body has been sent to Srinagar for the last rites as per the wishes of her relatives. Bulldozers and arson are being investigated at the resort.