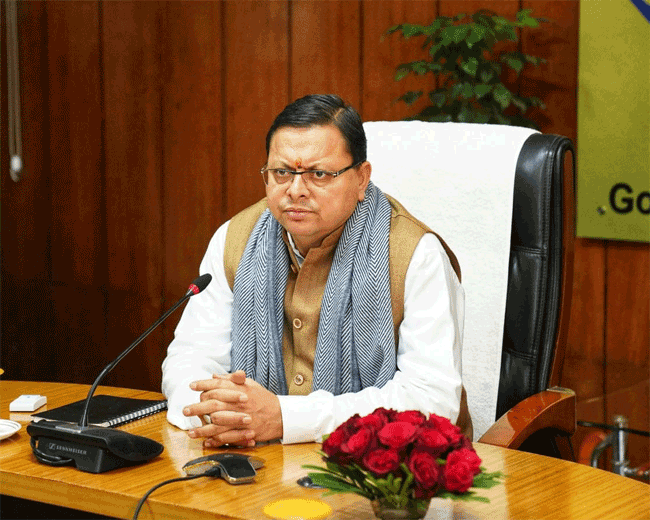 Uttarakhand Chief Minister Pushkar Singh Dhami, while reviewing the ongoing relief work in Joshimath at the secretariat, said that as soon as the reports of all the technical institutions and scientists regarding the causes of landslide in Joshimath come, further planning should be done expeditiously. After the final report of the study of landslide area of Joshimath, treatment works should be ensured expeditiously. The Chief Minister said that suggestions should be taken after meeting the people there for displacement. District Magistrate Chamoli should send the report to the government as soon as possible after taking suggestions from the local people.

The Chief Minister said that the people who will be displaced from the affected area of Joshimath, better arrangements will be made by the government. He instructed the officers that in the cities of the state which do not have proper drainage plan and sewer system, an action plan should be made in a phased manner for drainage and sewer system. Cities to be marked category wise

Secretary Disaster Management Dr. Ranjit Kumar Sinha said that in the preliminary investigation report of National Hydrology (NIH), the water seeping in Joshimath and the tunnel water of NTPC project are different. He said that the situation will be completely clear after the reports of other central agencies and the final report of NIH come. He said that 258 families of the landslide affected area of Joshimath have been accommodated in relief camps, all necessary facilities are being provided to them. He said that both water discharge and silt in the affected area have reduced drastically. Chief Secretary Dr. SS Sandhu, Additional Chief Secretaries Radha Raturi, Anand Bardhan, Secretary R Meenakshi Sundaram, Additional Secretaries Savin Bansal, Anand Srivastava and concerned officers were present in the meeting.
Disaster in the form of
It is noteworthy that due to land subsidence in Joshimath in Chamoli district of Uttarakhand, more than 600 houses had developed cracks. Highway cracked. Cracks appeared in the buildings and houses. Many temples are also under threat. Water sources burst at many places. In such a situation, the affected families were ordered to vacate their houses. Also, all construction activities related to mega projects like Chardham All Weather Road (Helang-Marwari Bypass) and NTPC’s hydroelectric project have been put on hold till further orders on the demand of local residents. The state government had said that people whose houses have been affected have to evacuate. He will get Rs 5000 per month as house rent for the next six months from the Chief Minister’s Relief Fund. Along with this, Rs 1.5 lakh is being given as immediate assistance to the affected.