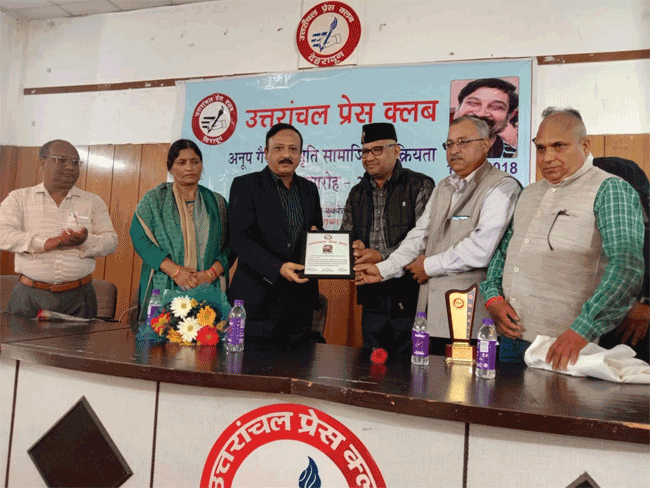 Activist Pankaj Kshetri was awarded the ‘Anup Gairola Smriti Social Activism Award’ for the year-2022 in a program organized by the Uttaranchal Press Club at Dr. Pitambar Dutt Barthwal Auditorium of the Club located at Parade Ground in Dehradun on Sunday. Renowned neurosurgeon Dr. Mahesh Kudiyal as the chief guest presented a shawl, memento and certificate to Pankaj on behalf of the club. On this occasion, Dr. Kudiyal said that behind all the good things that are happening in the society, there is certainly the hand of such people, who are working above selfishness. Realizing their responsibility towards the society, if every person tries to contribute something or the other, then the system will automatically improve. Pankaj Chhetri is such a responsible pillar of the society.

Dr. Kudiyal said that journalists, lawyers and doctors are such factors, whom people see as inspiration and Pankaj is such an inspiration to the society. He also narrated the memoirs related to late journalist Anup Gairola.
Sanjeev Kandwal, former General Secretary of the Press Club, introduced him to Pankaj’s social concerns. He said that Pankaj as a journalist, as a student leader, as a lawyer and as a political activist always gave priority to the public interest. Principal of Chamanlal College (Landhora) Dr. Sushil Upadhyay said that social service is in Pankaj’s nature and this honor will always remind him of his responsibilities. He also recalled the contribution of Anoop Gairola in the field of journalism.

Former president of the club Bhupendra Kandari narrated his experiences related to journalist Anoop Gairola. Supervisor of the club Vinod Pokhriyal read the standard. President Jitendra Anthwal said that due to people like activist Pankaj Chhetri, a ray of hope arises in the society. Pankaj Chhetri said that the honor has increased his responsibilities. Will try to live up to the expectations of the society. Dinesh Kukreti, the convenor of the club’s creation committee, expressed gratitude to all. The program was coordinated by Press Club General Secretary OP Benjwal.