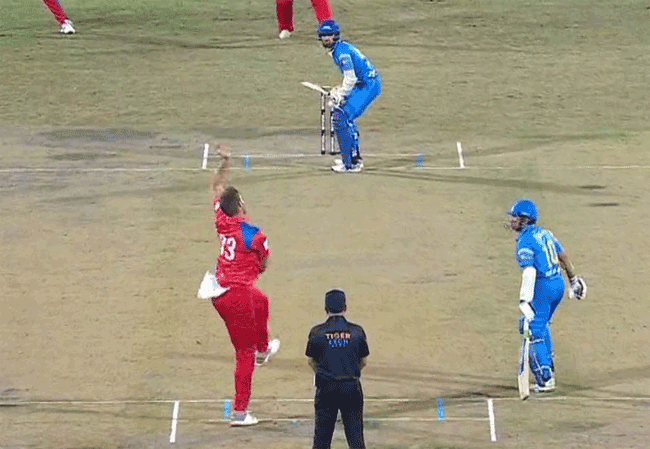 Cricket thrill was seen at the Rajiv Gandhi Sports Stadium in Raipur in Dehradun. The enthusiasm of the audience was at its peak in the packed pavilion. There were two balls left in the final over.

Then two spectators dodged the security personnel and fell into Sachin’s feet. Then wicket keeper Naman Ojha also reached Sachin. However, in a hurry, security personnel picked up both the audience and dropped them out of the field. In the match, Sachin’s proud on England’s legends was overshadowed. India Legends defeated England Legends by 40 runs. Sachin Tendulkar was given Man of Match for an aggressive innings of 40 runs in 20 balls. Apart from Sachin, Yuvraj (31 not out) for India Legends, Yusuf Pathan (27 runs) played innings. While Rajesh Panwar took three wickets while bowling brilliantly.

The match was played between India Legends and England Legends on Thursday at the Rajiv Gandhi International Cricket Stadium in Dehradun. The match started at nine o’clock at night due to wet the ground due to rain. Due to which the match was reduced to 15-15 overs. England Legends won the toss and decided to field first. Batting first, India Legend’s innings started by openers Sachin Tendulkar and Naman Ojha. 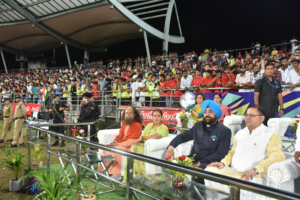 After Sachin’s dismissal, wicket -keeper batsman Naman Ojha also could not stand on the pitch for a long time and was dismissed for 20 runs in 17 balls. Suresh Raina, who came to bat at number three, scored 12 runs, after which Yusuf Pathan landed in the field. He took a lot of news of the England Lease bowlers and hit a long sixes. He returned to the pavilion after playing an innings of 27 runs in 11 balls. Stuart Binny was also dismissed for 18 runs in 11 balls.

In the final overs, Yuvraj Singh and Irfan Pathan made a better partnership and took the team to 170 runs in 15 overs to the loss of five wickets. Yuvraj Singh scored an unbeaten 31 in 15 balls with the help of three sixes and a four and Irfan Pathan scored 11 not out. Stephen Parry took three wickets for England Legends and Chris Skafield took one wicket. Raised 170 runs at the loss of five wickets in 15 overs. England Legends could score 130 runs in the prescribed 15 overs losing six wickets.

On Thursday, Governor Lieutenant General (C.N.) Gurmeet Singh and Chief Minister Pushkar Singh Dhami arrived at the Rajiv Gandhi International Cricket Stadium in Dehradun to watch the ongoing Road Safety World Series. He enjoyed the stadium and enjoyed the India Legends and England Legends Match. Earlier, the Governor and the Chief Minister got acquainted with all the players and welcomed everyone in Devbhoomi.

Chief Minister Pushkar Singh Dhami said that it is our responsibility to follow the rules related to road safety in today’s era. He said that this event will do public awareness in this direction. He said that this event of cricket will be helpful in promoting sports in Uttarakhand and recognizing Uttarakhand. Sports Minister Rekha Arya, Special Principal Secretary Abhinav Kumar etc. were also present during this period. (News continues, see in the next parent)

The road safety world series has been made free to enter the audience for the remaining matches of the series, except for India’s matches. There is an atmosphere of happiness by the Doon sports lovers regarding the tournament of cricket players. On Thursday, Ajit Bezberua, spokesperson of the organizer legend Sports at a hotel in Dehradun, said that in view of the enthusiasm of the audience, India’s match except the match has been made free in view of the trend of low sales of tickets towards other matches except the match. There is a lot of enthusiasm among the audience about both the matches of India. (News continues, see in the next parent)

India Legends vs Bangladesh Legends match on 25 September at 7:30 pm