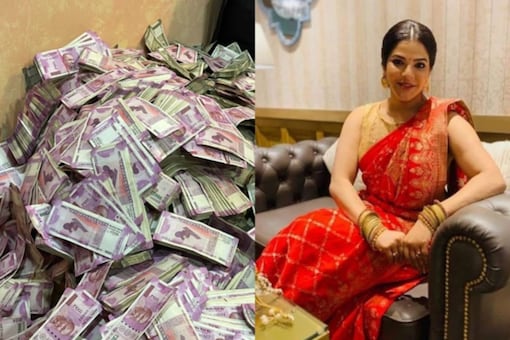 West Bengal : The ED on Wednesday raided another house of Arpita Mukherjee, a close aide of Bengal minister Partha Chatterjee, arrested in the teacher recruitment scam. ED has also found a treasure trove of notes at this house of Arpita. ED raids on this house have been going on for about 18 hours, in which Rs 29 crore cash and 5 kg gold have been found. Counting of notes continued throughout the night.

Apart from this, gold ornaments and biscuits have been recovered. Let us tell you, even before this, the ED has raided another house of Arpita, in which Rs 20.9 crore cash and documents of all the properties were recovered by the investigating agency.

According to sources associated with the investigating agency, cash worth Rs 50 crore has been recovered from both the flats of Arpita Mukherjee.

ED team entered inside by breaking the lock

Earlier on Wednesday evening, the team of investigating officers had reached Arpita’s house in Belgharia area of ​​Kolkata and the officers entered inside by breaking the lock due to lack of keys of the flat. Witnesses were also called during the lock-breaking and search operation. According to reports, the officials were stunned to see an even bigger recovery from this house of Arpita Mukherjee. Bank officials were immediately called to the spot and the counting of notes was started. According to sources, some other property documents have also been found. ED also found cash from the shelves.

Four bank personnel deployed for counting of notes
Sources say that after receiving unaccounted money from another house also, four bank employees had to be called to count the notes. 5 counting machines were installed. Here too, like Arpita’s house in Tollygunge, the wardrobes of the flat located at Belgharia Town Club House here were filled with bundles of notes. After the news of getting bundles of notes here, a huge crowd also gathered.

In custody till August 3

Partha Chatterjee and Arpita Mukherjee are currently in ED custody till August 3. Parth had to be hospitalized by the investigating agency officials after his arrest. He is constantly being questioned about the education recruitment scam. The ED says that the money received from Arpita’s house is the money earned through education recruitment scam, which belongs to Partha Chatterjee. However, when asked about the resignation of senior minister Partha Chatterjee in the Bengal government, he got furious. Parth says what is the need of this?

Parth still not ready to resign

This question was asked to him outside the ESI Hospital in Joka, Kolkata. In the morning, Chatterjee and his close aide Arpita Mukherjee were taken for a routine check-up before the ED’s questioning. The minister was taken to the hospital under tight security and from there, about two hours later, the central agency took him to the ED office of Sejou Complex in the city’s Salt Lake area. Partha Chatterjee was asked, is he considering resigning from the post of minister, to this question, Chatterjee said, what is the need to resign?

Many houses of Arpita were unearthed

The ED says that the premises of Partha Chatterjee and Arpita Mukherjee were raided on Wednesday in connection with the investigation of irregularities in the schools. Raids are being conducted at some places including Rajdanga and Belgharia where Arpita’s properties have been found. “We have traced some of Arpita’s flat in Belgharia and another flat in Rajdanga (in the southern part),” the ED officer said. Officers are conducting searches there.

On August 4, thousands of children of Delhi will make the world’s largest tricolor, will make the country number one – Arvind Kejriwal