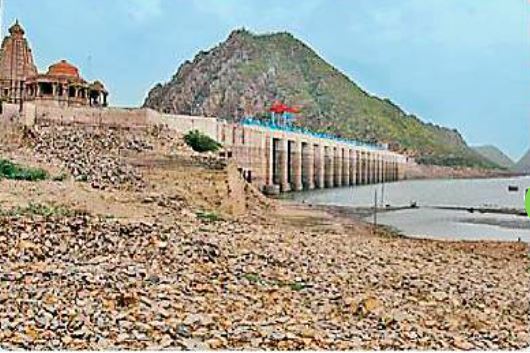 Jaipur : In the midst of the scorching heat in the country, the water of big dams is continuously decreasing. According to the Central Water Commission’s report released this week, the water level of 60 out of 140 big dams in the country has decreased as compared to last year. The maximum 10 states have been affected. The reservoir of water from their big dams has been continuously depleted.

Out of five major dams of Rajasthan, the water of three dams Bisalpur, Jawai and Rana Pratap Sagar is decreasing. The water of six dams in Madhya Pradesh and two big dams in Chhattisgarh also decreased. It is a matter of relief that the total water level in major dams of the country has increased as compared to last year. Presently, the total water level in these dams is 56.877 Billion Cubic Meter (BCM), as against 53.543 BCM last year. You can see how the water level has decreased in the table below.

The water level has come down in 12 major dams in Maharashtra and 10 in Gujarat. In the eastern region are Jharkhand, Odisha, West Bengal, Tripura, Nagaland and Bihar. The water in 10 of their 21 dams has gone down. The details of the dams where water has receded are given in the table below.

According to the Reservoir Report of the Quality Council of India and the National Mission for Clean Ganga, about 38% of the water bodies in Bengal, UP, Bihar, Uttarakhand and Jharkhand settled in the Ganges region have dried up. These include 84% in Uttarakhand, 41% in UP, 35% in Bihar, 17% in Bengal and 16% in Jharkhand.

Corona’s fourth wave will come at the end of June? Know what the former director of AIIMS gave the answer

Important disclosure in WHO emergency meeting on monkeypox ; More than 100 cases confirmed in Europe so far, know 10 updates