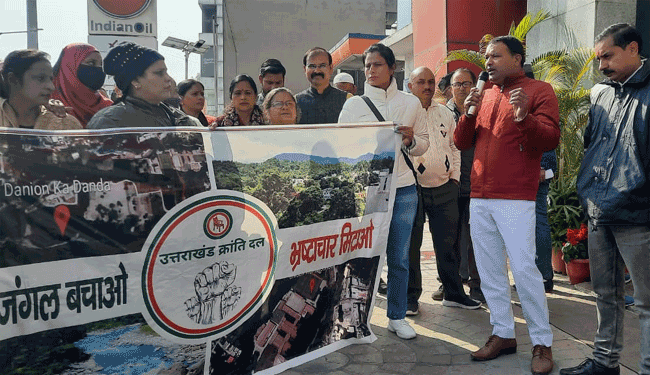 Raising questions on the functioning of the Mussoorie Dehradun Development Authority, the metropolitan workers of the Uttarakhand Kranti Dal demonstrated. During the demonstration held in front of the Transport Nagar authority in Dehradun, several allegations were leveled against the authority. This demonstration was done under the leadership of Metropolitan President of Ukrand, Vijender Singh Rawat.

During this, Vijender Singh Rawat alleged that illegal encroachment of lands is being done by Mussoorie Dehradun Development Authority in Dehradun city area. Simultaneously, the maps of plotting are being passed illegally by not passing the maps as per the standards. All the plotting is going on near the forest land. The authority has completely indulged in corruption and is doing its arbitrariness ignoring the complaints of the public. (News continues, see next paragraph)

He said that due to the short-sightedness of the Mussoorie Dehradun Development Authority, the condition of Dehradun has deteriorated. The roads of Dehradun are not passable. Parking facility is not available anywhere. Roads and lanes have become narrow. Commission is being looted in construction works. If physical inspection of the work done by Mussoorie Dehra Development Authority is done from time to time, then the situation would not have been very pathetic. Money is being misappropriated in the name of beautification of parks. The condition of the parks remains the same. It is necessary to take concrete steps to prevent corruption in the authority.

UKD Executive District President Kiran Rawat Advocate said that the investigating agencies should probe the assets of MDDA engineers. Also, affidavits of declaration of assets on behalf of all officers should be submitted under the employee code of conduct. Metropolitan Executive President Anil Doval said that Mussoorie Dehradun Development Authority should discharge its basic duty. Ensure your role in making the city a parking-rich, park-rich colony and a green city. (News continues, see next paragraph)